Chris Canas Band at The Alley! 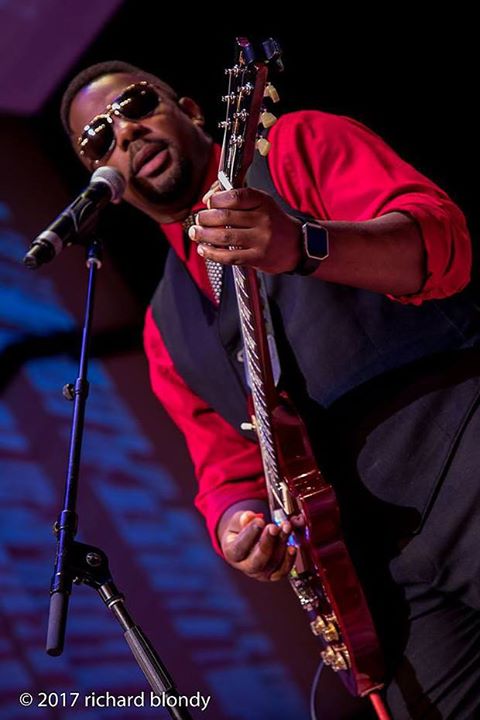 Chris Canas (aka Christopher Lenard Cottingham) was born on July 18th, 1984 to Angela and Lenard Cottingham. He has grown with music in his life whether it be his Mom singing to him or taking him to see Ray Charles at Hart Plaza or his Dad singing and dancing him to sleep as a kid. Music is part of his very soul and is the main reason he has grown into such a musical person today. His first true instrument was discovered when he chose a Coronet over all other instruments because he was too shy to speak up and claim the Saxophone in 5th grade. But he loved it nonetheless and treated it as if the sounds he could make were doubling as a musical release as well as a therapeutic one. Chris quickly rose through the rankings of 5th grade band only to find his music instructor David Drake promoted him to Jazz band. It was this move to Jazz that truly piqued Chris’ interest in another realm of music. While in Jazz band Chris played all over eventually landing with the Ann Arbor School for the Performing Arts group. He primarily joined the jam portion of the group and performed at Bird of Paradise, the Firefly Club, Top of The Park, and even The Ann Arbor Art Fair on numerous occasions. He was being primed to follow in the footsteps of Miles, Monk, Baker, Parker, and Marsallis. But something happened to this young man at the tender age of 10 that was just starting to boil over. The Blues had taken him and it wasn’t going to ever let him go. Chris’ Uncle Jamerson rolled up in a Cherry Red T-Top Camaro and was bumping BB King’s “Thrill Is Gone” with all his speaker systems might, and an innocent shy boy immediately began his transition into a Blues Man.

Chris eventually discovered a rickety old dusty P-Bass in his grandmother’s garage which only had 2 strings on it. Chris took it upon himself to clean it up real good so he could play it. Only problem was he didn’t yet know how to fix a Bass so he just learned on those 2 rickety rusted strings. His parents eventually realized that music was his passion and got it completely fixed so he could finally learn how to play the full Bass. Eventually even that wasn’t enough and Chris picked up Piano, Sax, Drums, Harmonica, and eventually found his true love…..The Guitar. His first guitar was a cherry red Squire with a celebrate diversity sticker on it and a rainbow strap. Yeah Chris likes color apparently. Now he was ready to go off and learn guitar. He spent days locked away in his room and after learning every BB King, Albert King, and Freddie King song note for note for 6 months he wrote his first album at the age of 15 “Shades of Blue”. Of course this was after he didn’t get a Playstation for Christmas but instead got a four track mixer which he greatly appreciates…..NOW. Chris went on to win the Ann Arbor Talent Show performing 2 of his songs off of the SOB album “Unforgiven” which he still plays to this day and “The Blues” which was inspired BB King’s “A Blues Boys Tune”. He landed a gig with Ejuana “Fire” Taylor and went on the road with her and her band for a bit while honing his skills at the Tap Room jam session in Ypsilanti which is still running every Thursday to this day. Chris eventually hooked up with Thornetta Davis and was taken under her wing at the age of 18 and opened his eyes up to the rich Detroit Music scene as well as exposed him to countless Pro musicians. in 2003 Chris formed the, dare I say it one last time, “Chris Canas Hyper Dynamic Blues Revolution” which was later shortened to “The Chris Canas Blues Revolution” which shortened again to “The C2BR” and finally, finally ended with the “Chris Canas Band”. Chris has since released a total of 5 albums with his latest being “She’s Breaking Me” reaching heights he never thought possible. His is currently finalizing his 6th album “Would You Mind” and is set to unleash it sometime in 2016. Chris has written and arranged well over 150 Original songs and has reimagined a plethora of oldies but goodies. Right now, the Chris Canas Band consists of; Chris Canas on Guitar and Vocals, Angela Cottingham on Percussion and Vocals, Kevin Schoepke on Bass, Michael Scott on Drums, and Hammond endorsed artist Chris Nordman on Piano and Organ.

The award winning Chris Canas Band can be seen blazing a trail in the Metro Detroit area and beyond. In 2007 the Chris Canas Band won their first Blues Competition when they competed in the West Michigan Blues Society challenge. They also won the Kalamazoo Valley Blues Association challenge in 2010, the Detroit Blues Society challenge in 2012, 2014, and a double win from the Orange Blossom Blues Society and the Detroit Blues Society in 2015. Chris ” The Soldier For The Blues” Canas, has put together a who’s who of veteran musicians over the years and has learned many many lessons the long hard way to help keep the blues alive and moving forward for all music lovers. The Chris Canas Band has a well blended set of classic covers and clever, roller coaster like originals that keep you captivated and coming back for more. With their diverse mix of Blues, Funk, and Soul they are always well equipped to bring the house down wherever they go. With heart-wrenching vocals, pulse pounding rhythms, and an electric energy that can be felt in the air. Don’t miss an opportunity to see the CCB “LIVE” and in the flesh. Do your Soul a favor and feed it some hot Bluesberry Pie with a side order of fresh cut Funk and a tall glass of Soul! The Chris Canas Band is available as an Acoustic Solo-Duo, Three Piece, Four Piece, or Five Piece act. This band is driven to pump new life into “The Blues” as well as embracing the rich traditional roots of the past. Brace yourselves and COME GET SOME YA’LL!