Celebrating their Golden (50th) Anniversary together, the iconic
and profound... 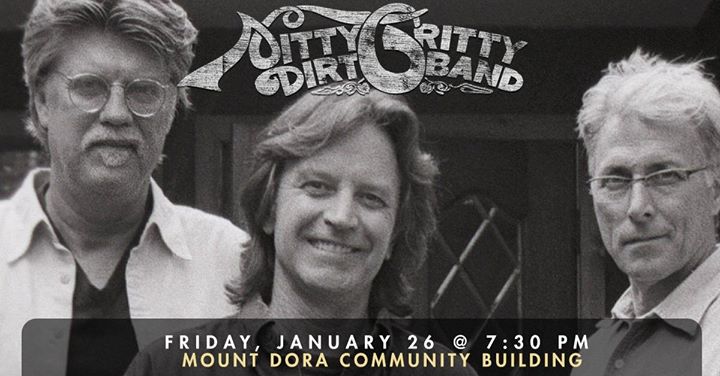 Celebrating their Golden (50th) Anniversary together, the iconic
and profoundly influential Nitty Gritty Dirt Band, often cited as a
catalyst for an entire movement in Country Rock and American
Roots Music, continues to add to their legendary status.
With multi-platinum and gold records, strings of top ten hits such
as “Fishin’ In The Dark” and “Mr. Bojangles”, multiple Grammy,
IBMA, CMA Awards and nominations, the band’s accolades
continue to accumulate.

Today, NGDB (Jeff Hanna, Jimmie Fadden, Bob Carpenter, John
McEuen) continue their non-stop touring in their 51st year
together. Recent tour stops included Stagecoach, Hardly Strictly
Bluegrass Festival and many more. On September 14th, 2015 they
played to a Sold out Crowd at The Historic Ryman Auditorium with
some close friends to film a 50th Anniversary Special which began
airing on PBS starting March of 2016. The TV special earned a
2016 Emmy award for Special Event Coverage at the Mid South
Regional Emmy Awards.

Bailey Callahan is a 17-year-old Nashville recording artist, singer, song writer and gifted performer. She has opened for Luke Combs, Runaway June, Hunter Hayes, Sawyer Brown, Scotty McCreery and performs in arenas and stadiums across the country. Her self-titled EP was recently released and reached #43 on the ITunes charts, her CD will be out in the Spring 2018. Her 1st CD was also recorded in Nashville with Martina McBride’s band backing her. Bailey’s music can be found on ITunes, Spotify, CD Baby and her original songs are played regularly on radio stations and internet stations across the country.

In support of One Team One Fight 4 PTSD.