Due to the effects of Hurricane Irma, Rock and Roll Hall of Famer Sammy Hagar and The Circle, featuring former Van Halen bassist Michael Anthony, Jason Bonham a... 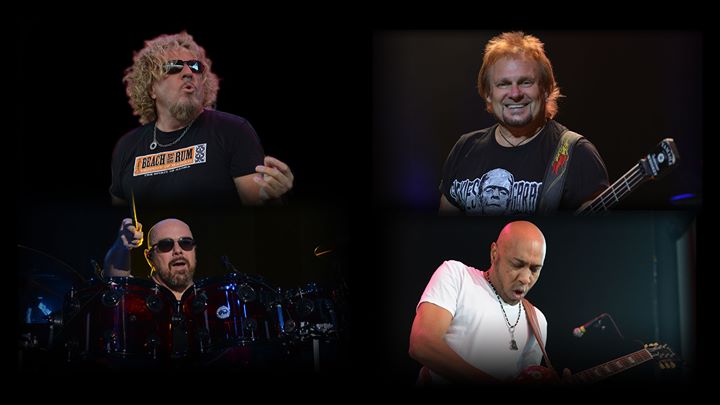 Due to the effects of Hurricane Irma, Rock and Roll Hall of Famer Sammy Hagar and The Circle, featuring former Van Halen bassist Michael Anthony, Jason Bonham and Vic Johnson, live in concert with special guest Collective Soul originally scheduled for Wednesday, September 20 has been rescheduled for Saturday, November 11, 2017.

In a statement released by the tour, “Due to the effects of Hurricane Irma across the state of Florida, the Sammy Hagar & The Circle Florida tour dates with Collective Soul have been rescheduled, including the September 20 date at the St. Augustine Amphitheatre; which has been rescheduled for November 11. The tour hopes the rescheduled dates will come at a time when all of Florida has had a chance to heal before they return to the area to put on a great performance for their fans.”

For almost 40 years, Sammy Hagar has been one of rock music’s most dynamic and prolific artists. From breaking into the industry with the seminal hard rock band Montrose to his multi-platinum solo career to his ride as the frontman of Van Halen, the “Red Rocker” has set the tone for some of the greatest rock anthems ever written with songs like “I Can’t Drive 55,” “Right Now,” and “Why Can’t This Be Love.” He’s earned the highest respect of the music industry with a Grammy Award and induction in the Rock and Roll Hall of Fame alongside Van Halen and is currently on his fourth platinum run with the super group Chickenfoot. Along his journey, Hagar has also become a dedicated philanthropist, a New York Times best-selling author and auspicious entrepreneur.

Hagar first burst onto the scene in San Francisco as the lead singer of Montrose. Following a string of eight solo albums culminating in several platinum efforts and hundreds of sold-out concert appearances, Hagar joined Van Halen in 1985 and took the band to unprecedented heights, including four consecutive No. 1 albums before the brand broke up in the mid-nineties. He later returned to Van Halen to lead a triumphant 2004 reunion tour.

Aside from making his mark as hit songwriter and lead vocalist, Hagar has played with a succession of legendary guitar players; from Ronnie Montrose and Neal Schon to Eddie Van Halen and Joe Satriani and his current group, The Circle, which also features former Van Halen bassist Michael Anthony, Jason Bonham and Vic Johnson.

Collective Soul features Ed Roland (vocals, keyboards, guitar), Dean Roland (rhythm guitar), Will Turpin (bass), Jesse Triplett (lead guitar) and Johnny Rabb (drums). As Ed Roland sings in “This,” the infectious first single and kick-off track on See What You Started By Continuing: “I got to go… where this song leads / Got to go… where this heart bleeds.” Collective Soul have followed their songs and souls to hits and multi-platinum alt-rock success, starting with 1993’s anthemic hit “Shine” and onto “December,” “The World I Know,” a duet with Elton John, a song on the hit Twilight soundtrack, and eight acclaimed albums.